This document describes the two chips involved in the video output of Amstrad CPC computers. The two chips are CRTC (HD6845) and Gate Array (40010). CRTC is responsible for generating CRT timings and memory addresses, and Gate Array does conversion from data to RGB signals along with other CPC specific tasks.

Amstrad CPC contains Motorola 6845 Cathode Ray Tube Controller on its board as part of display generation along with a custom ASIC gate array marked as 40010. What 6845 primarily does is to generate CRT signals such as Horizontal Sync and Vertical Sync as well as video memory addresses to fetch pixel data. Gate Array works together in sync with CRTC, and is responsible for converting the pixel data in memory into video signals through an R2R DAC.

Motorola 6845 was used for other computers at the time, most notably the early IBM PC compatibles with CGA video cards, and the later standards such as EGA and VGA were compatible with it. It is advised to study the datasheet for Motorola 6845 in detail for the block and timing diagrams to understand how it works.

Additionally, in the context of Amstrad CPC computers, we need to know how it's interfaced on the board with the rest of the system. Here I will provide notes about the display mechanism of Amstrad CPC. 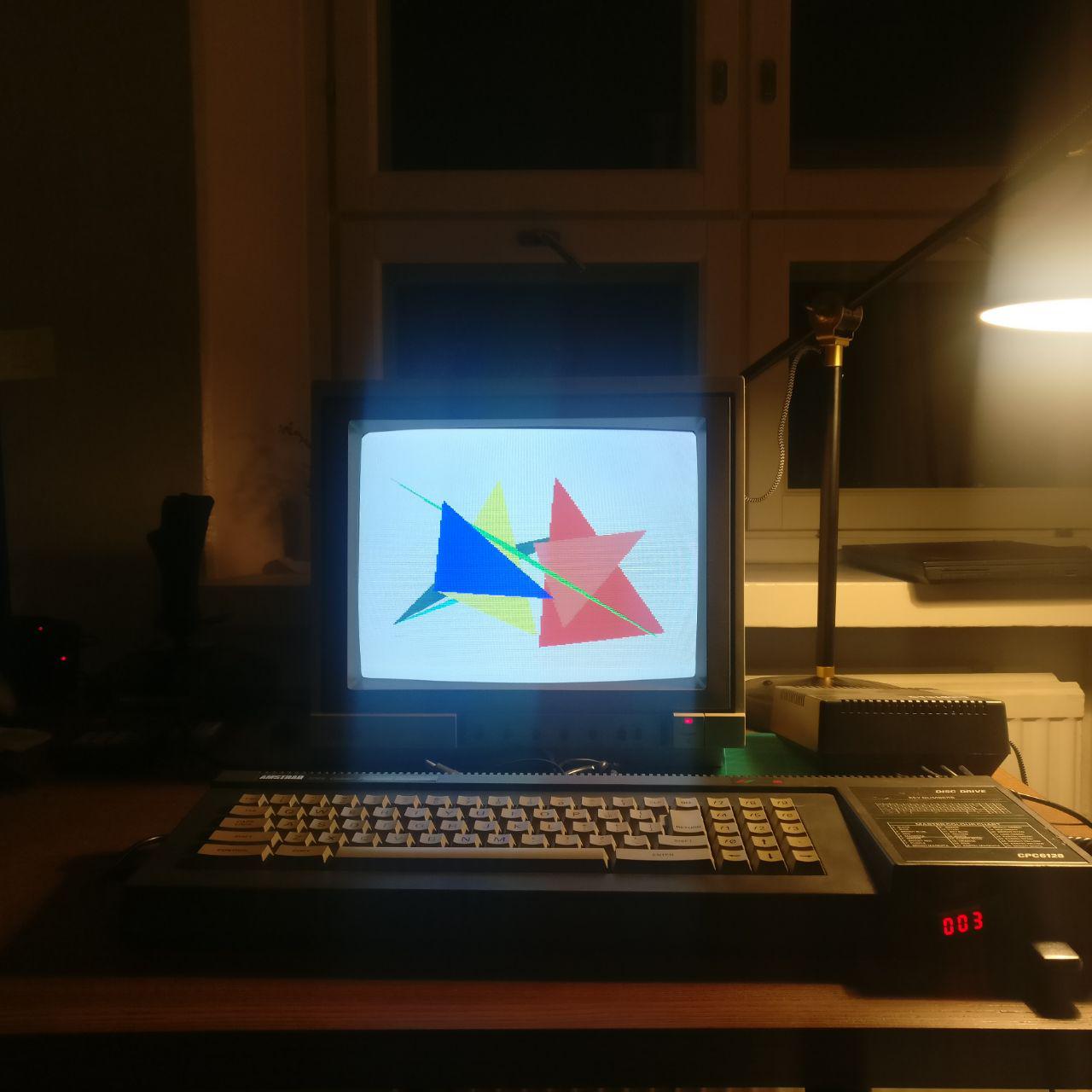 To experiment with the result of each register you can set them from BASIC.

The following will set Register 1 to the value 42: 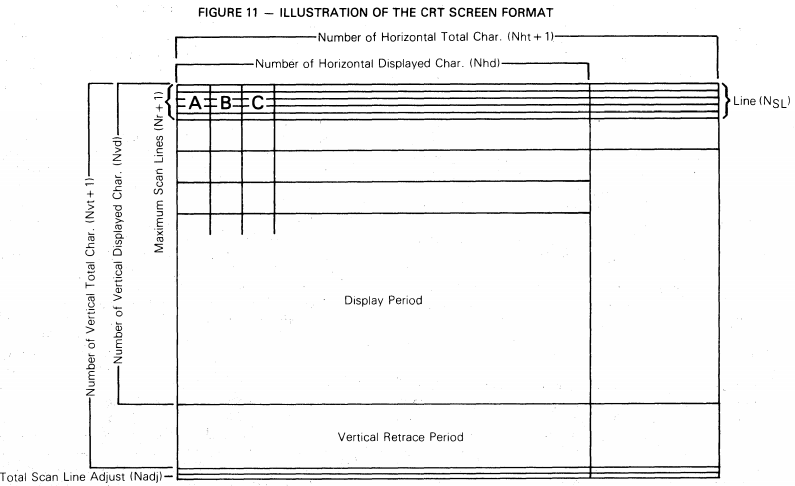 The entire screen character addresses, with the default CRTC register values, are from 0xc000 to 0xc7ff. In mode 1, one character is 2 bytes wide, encoding 2-bit color information. So, the position of a character can be addressed as 0xc000 + 80 * y + x * 2.

If you are careful, you will notice that even though a 40x25 character screen takes 1000 characters in total, which takes 2000 bytes space in memory, CRTC jumps 2048 (0x800) bytes for every subsequent scanline of a character. The extra 48 bytes is simply not visible on a static screen. However, when the screen is scrolled, they will become visible. Also, since there are 8 scanlines for a character row, it means in total 8 * 48, there are 384 bytes of undisplayed video memory.

CRTC consists of a bunch of registers, internal counters and comparators. The way they are wired slightly differ between different 6845 implementations.

Note: The following sections are taken from CAST's C6845 datasheet: 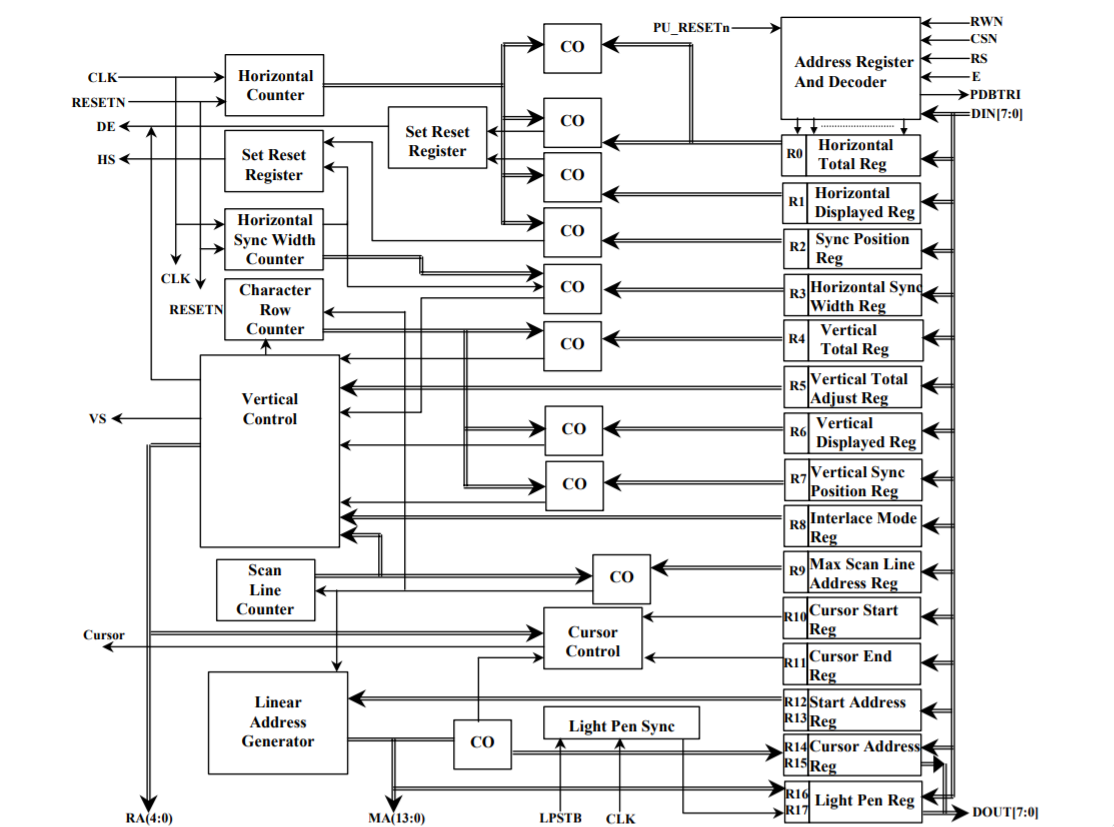 The Horizontal Counter counts from zero until coincidence with Register R0 synchronously resets the counter. This represents the horizontal line rate and enabling of the Display Enable (DE) for a new line takes place.

Coincidence of the Horizontal Counter with Register R1 marks the end of the active display portion of a horizontal line with Display Enable (DE) going inactive.

The Character Row Counter coincidence with R4 and the residual Scan Line count represented by R5 marks the end of a vertical frame.

The Character Row Counter coincidence with Register R6 marks the end of the active display portion of the vertical frame measured in character rows.

The Character Row Counter coincidence with Register R7 marks the beginning of vertical retrace with Vertical Sync (VS) going active high. VS remains high for a fixed period of 16 scan lines.

Register R8, Interlace Mode Register, effects the Vertical Timing according to its programming. Normal Sync (Non-Interlace) mode displays the same field each frame. Interlace Sync Mode splits a frame into even and odd fields. Vertical Sync (VS) active high is delayed one-half scan line at the end of even fields. For Interlace Sync & Video Mode, in addition to the VS delay on even fields, the Row Address counter sequences on even fields through 0,2,4,… counter values while on odd fields, through 1,3,5,… counter values." (CAST's C6845 datasheet) 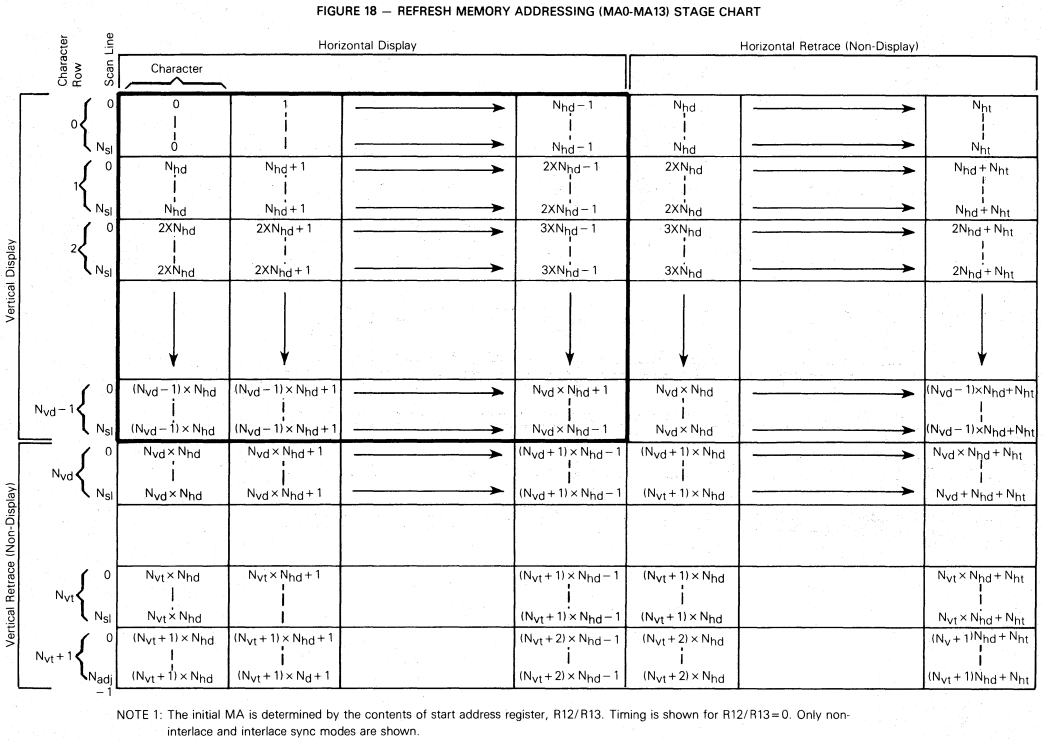 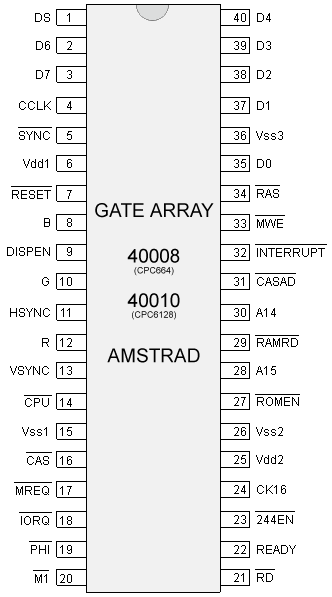 Gate Array is a custom ASIC designed by Amstrad. Periodically it reads the data available on the data bus as set by CRTC's memory address pins, and converts them to analog video signals based on the selected screen mode specific pixel format. It is also responsible for memory banking, storing color palette, border color, and issuing an interrupt that pulses every 52th horizontal sync signal.

Gate Array is port mapped to the address 0x7f00, and provide the following interface:

For more details on the parameters of each command, see: http://cpcwiki.eu/index.php/Gate_Array

Color pixel format is described in the firmware manual in detail. Here the C macros are provided for conversion from ink color to byte and vice versa, along with a table representation.

As you can see from the way bits shuffled around:

Gate Array can only see the same first 4 banks of memory (from 0 to 0xffff) regardless of the memory banking scheme configured.

Gate Array is connected to a 16Mhz clock signal, which is then divided to 4Mhz to feed the Z80, and 1Mhz for the CRTC. Gate Array's READY signal is connected to Z80's WAIT input for "memory contention". This means CPU execution is halted every time Gate Array and CPU accesses the memory at the same time. The reason for this is that both GA and the CPU share the same address/data bus for memory access.

During T2 and every subsequent automatic WAIT state (TW), the CPU samples the WAIT line with the falling edge of the clock.

That is, most of the time, CPU will wait only when WAIT is active during T2, which is 1 out of 4 or more T states that constitutes a machine cycle (M). Incidentally, Gate Array releases WAIT pin 1 out of every 4 clock cycles.

This means, Z80 and GA are accessing the memory in alternating order. This is not always the case, though. If Z80 samples WAIT when GA is accessing the memory, which do occur, then Z80 will wait until GA releases it, after which they will be in synchronization until another overlap occurs.

There is an internal 6-bit counter which gets incremented on each HYSNC signal. When it equals 52, the counter is set to zero. Since a frame is composed of 312 HSYNCs, at most 6 interrupts are generated per frame.

When the bit 4 of RMR command is set, it will clear the HSYNC counter.

Typically a HALT instruction after polling VSYNC bit of PORT B will allow synchronizing to the frame:

The reason HALT is needed for a perfect synchronization is because the code for polling VSYNC will have a variable clock cycle difference at the end. If no HALT is issued, it is not possible to know exactly where the Z80 code is synced with respect to the screen.

The next interrupt is generated two HSYNCs after a VSYNC, which means when the Z80 wakes up after a HALT it will have slept for ~128 microseconds in addition to the amount of time spent in the interrupt routine.

The characters consist of scanlines that amount to the value of R9 + 1, 8 by default. The number of bytes required for each character depends on the graphical mode: 1 byte in Mode 2, 2 bytes in Mode 1, and 4 bytes in Mode 0.

The subsequent scanlines of every character are &800 bytes apart from each other. For instance, each address line for the character at &c000 is calculated with &c000 + y * &800. 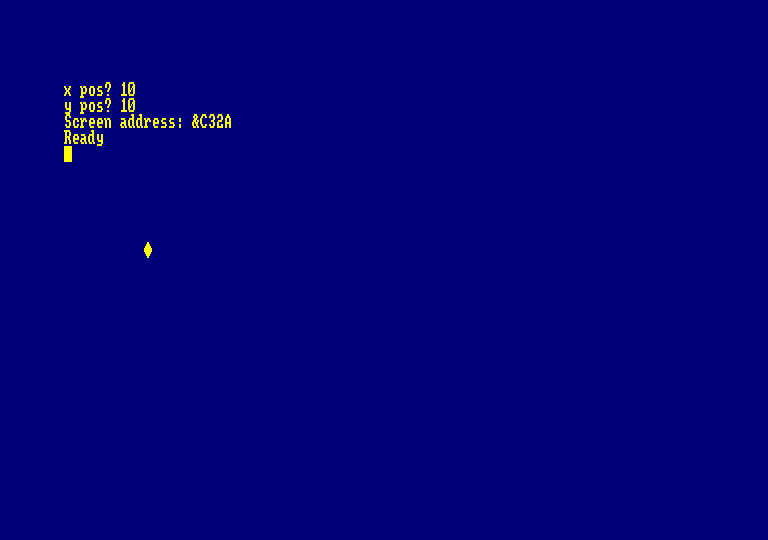 Hardware scrolling in any direction is achieved by changing the display start address through R12 and R13 registers of CRTC. Incrementing memory address register by one will shift the screen by 1 character in "mode 1". However, as you will realize, this corresponds to 2 bytes due to address bus interfacing described earlier. That is, setting R13 from 0 to 1 will result in the memory address to start from 0xc002. Important thing to note is that when the screen is scrolled, it will wrap around. You will have to do redrawing for the areas that become visible.

Since the amount of pixels scrolled is 2 bytes this can be considered "coarse" scrolling. Smoother scrolling require more complex tricks, and different techniques are employed for both vertical and horizontal smooth scrolling.

The following BASIC program demonstrates the coarse scrolling by setting the R12 and R13 registers based on keyboard input.

Full screen can be achieved with the following CRTC configuration:

However this is not practically useful since the memory range CRTC can address is is limited 16K, but the screen size now requires more than that. For this we need to set R12 to &1C, which will make the video bank range from &8000 to &FFFF.